Home » News » The Benefits of Teaching Toddlers a Second Language

The Benefits of Teaching Toddlers a Second Language

Have you ever been in a situation where you have not understood the spoken language and thought, I would love to know what they are saying? Or even wondered ‘are they talking about me’?

At Hopscotch Children’s Nurseries, we believe that anything is possible and recognise the importance of introducing babies and toddlers to a range of languages.

Babies Are Ready for Language Teaching

A baby’s brain can understand language twice as fast as they are able to actually verbalise. That is, they understand what we are saying despite being unable to speak in the first few years of life.

As such, we teach Makaton signing at all of our nurseries. Makaton signing is a method that uses signs and symbols to communicate and facilitates the progress of spoken language. Makaton enables a child to ask for things they need, and they learn this language extremely quickly, particularly ‘please’ and ‘more’ during snack time! Using the Makaton approach provides the foundations through which children at Hopscotch can acquire new language skills in multiple languages as they progress through the nursery.

Brighton and Hove has a diverse cultural population with nationalities from across the globe, and our team at our Hove Station nursery reflects this with staff who speak Spanish, Italian, Dutch, French, Polish, Slovakian, Czech (and of course English!).

This diversity means we are able to deliver informal, multi-lingual, play-led activities into our children’s learning every day. We also offer more structured Spanish classes at our nursery in Hove Station which the children absolutely love. We use props to make their learning fun and sing Spanish songs. The repetitive nature of songs allows children to acquire additional languages more easily and support memory retention. Peripatetic teachers also provide free language lessons for children at some of our other Hopscotch nurseries.

Why Learn Foreign Languages at Nursery?

Nursery is the perfect time to acquire basic language skills for a number of reasons:

Clearly the benefits of learning foreign languages at nursery are plentiful with considerable research pointing to preschool being the ideal time to start learning.

As parents we make efforts to nurture our children and encourage their development through activities such as play, dance, sports, and sensory stimulation. Acquiring new languages should definitely be a part of this development, preparing our children for success in every aspect of their adult lives.

This Blog was written by Lorraine Brown, our Nursery Manager at Hove Station 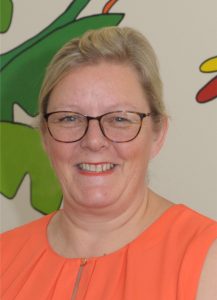 Lorraine is a Qualified childcare practitioner with 20 years knowledge and experience in childcare, as well as a Diploma in Leadership and Management. She joined Hopscotch having been the Head of Operations for a group of 6 nurseries in West Sussex for 5 years. Prior to this an NHS Family and Childcare Coordinator in West Sussex for 10 years.

In her spare time she rides horses and was in the England Endurance Team in 2012 and won!  Her proudest achievement is her two children, with one son a Physics Teacher and one studying a Masters in Mechatronic and Robotic Engineering.

‘The highlight of my career at Hopscotch Hove Station was achieving Ofsted Outstanding alongside my team’.

You can find us here

Please do not refresh your browser